Our project weeks in Nepal started in October 2019 in Pathsala-school, Kathmandu. In this private school parents pay comparatively high prices for the education of their kids. It is an international school.  Our students (14-16 years) had already learned about climate change and energy transition. So, they already had previous knowledge. Also, they were used in working with computers and cameras. In summary: they can best be compared with schools in Germany.
These students had a much higher CO2-footprint than all other schools we visited in Nepal. Motorised mobility with cars and motorbikes is quite common to them and many of them already traveled by air-plane. Refrigerator, hot shower, internet und electricity around the clock belong to their daily life as much as living with divided responsibilities.
Accordingly their ideas and stories around energy and reasonable energy consumption in the context of renewable energies and climate change often were centered around a technical environment. 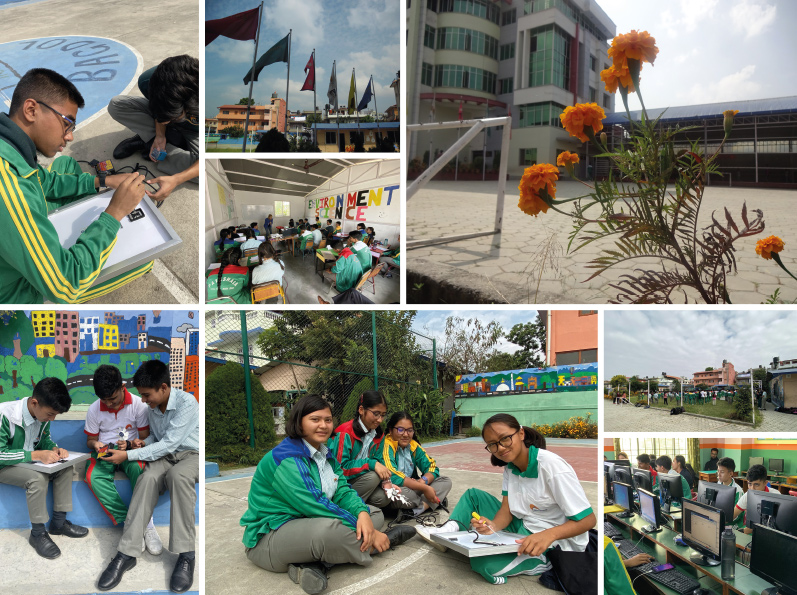 The school of Tharlam-monastery in Kathmandu is quite hidden in Bodnath, one of the Buddhist centers in Nepal. In school the young monks focus on mathematics and languages – Tibetan, Nepali, English. A wide age span among students ranging from 3 to 30 shows a completely different understanding of time and what is deemed to be important. Any monk who fails the test remains at the same level, independent how many years it takes. This different kind of thinking and living together showed out also while we were working with the young monks.

With great openness they were interested in the topics of energy and climate change. With enthusiasm and mindfulness they learned how to make photos – most of them never had a camera nor a smart phone in their hand – and they were writing short stories around energy.
Their enthusiasm attending our classes, making photos and writing stories was so vivid that also the little monks wanted to participate in our program. So, I extended my stay and the little monks became part of the project and contributed their fresh ideas and creativity.

The special thing about the pictures and stories of the monks – regardless of the age – was, that they experience energy as a triad: spiritual energy, human energy and technically usable energy. 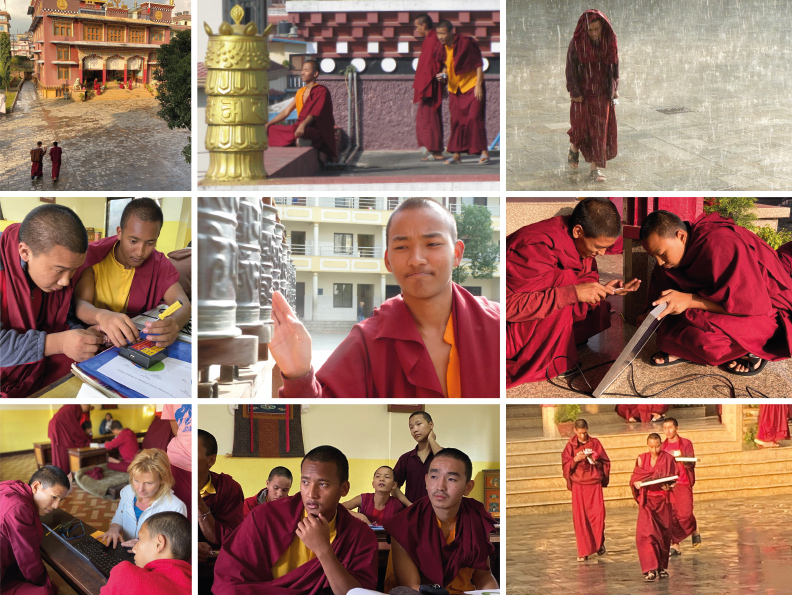 In November 2019 we went to Kankada, a remote mountain area in South-East Nepal. Already Silinge, our first stop, was difficult to get to. From the main road it took us at least three hours, on narrow roads, improvised cuttings and mountain paths crossing wilderness and streams. During Monsun the small road often is impassable and you clearly can see the erosion on the steep slopes. Two times a day there is a bus and now and then you hear a motor bike.

In the school of Silinge we worked with the students of the two highest classes (about 12-16 years). One week we discussed topics like the energy mix of Nepal, emissions, the challenges of climate change and the impact of own behaviour. Like in all other schools the kids took photos and wrote their stories. During this week they also built solar panels which we brought with us. We were impressed how fast and skillful these kids, who never had dealt with a srew driver nor with electric appliances had managed to produce electricity with these panels.

Their photos and stories focus on the energy in nature, the movements of water and the cultivation of crops. Different to the kids in Germany, nearly on every picture you see humans or animals.
These kids see energy in the context of agriculture: natural agriculture with lots of bees and without fertiliser. Also, there were photos of emerging buildings. Steel girders should provide more stability, as the devastating earthquake in 2015 made many families homeless. 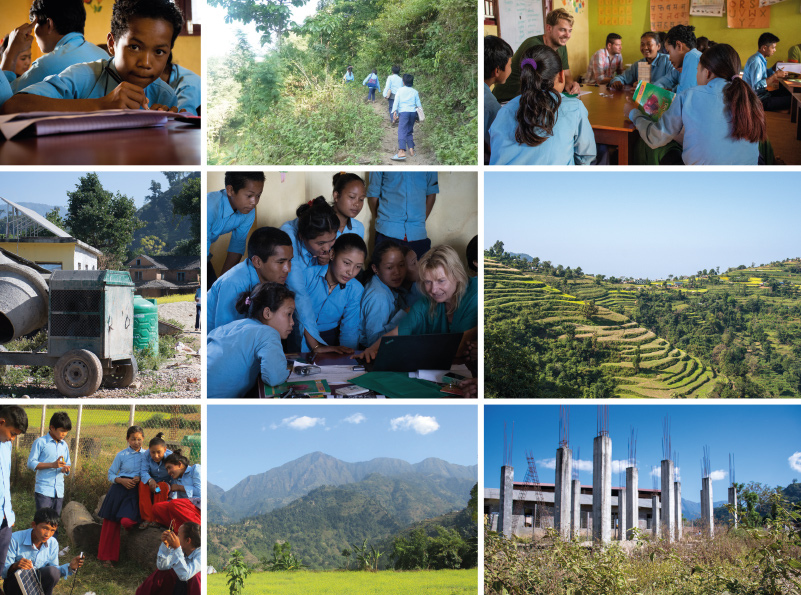 In Damrang, a region where you don’t have electricity nor streets, we tought the kids of the highest three classes. Many of them had to walk more than two hours with improvised cuttings and slippery mountain paths. Here the differences to our German living environment were felt most clearly. These students were very attentive, mindful and always amazed at what is needed elsewhere – warm shower, refrigerator or motor vehicles. Cameras were just as foreign to them as the solar panels we had brought with us. At first they were shy and cautious, but then they learned quick to take their photos on energy and put the panels together during the week.
It was striking how little the individual pushes himself into the foreground. Answers to questions were first coordinated within the group and then called together in the choir. Community thinking and respect for others was felt everywhere. Also when queuing for the daily school lunch – for many children the only meal of the day – there was no pushing in and no hectic noise.
It was important for the children to live in harmony with nature and to use energy only for what is necessary. Agriculture without artificial fertilizer, food that grows locally and is either eaten or sold, and a grateful and moderate use of water are the images that children associate with energy. Many consider the price of mobility to be very high. They know the noise and bad air from the villages three days’ walk away. Despite the poor transport connections, many people are skeptical about building roads.

The four 10th classes of the integrated secondary school at the Heinrich Mann School in Berlin-Neukölln had their project week at the beginning of January 2020. Each class had its own schedule and visited different partners of the WindNODE project in Berlin within a week. At the TU, Siemens, Vattenfall, Gasag and 50Hertz, they got an insight into the complexity and opportunities of the energy world and were the testers for the new Hertzschlag game from Stromnetz Berlin.
When the students were able to simulate the use of electrical energy on a model, they understood much more that energy not only includes electricity, but also home heating and mobility, such as driving by car or subway. This markedly changed their attitudes and awareness of energy and the environment and their interrelations. The photo motifs and texts focused on three major topics: protection of the environment and nature, CO2-free energy generation and the avoidance of waste, thereby reducing energy consumption. At the end of the week, the youngsters proudly presented their parents and classmates with the photos and stories as well as their own charts on energy generation and consumption. 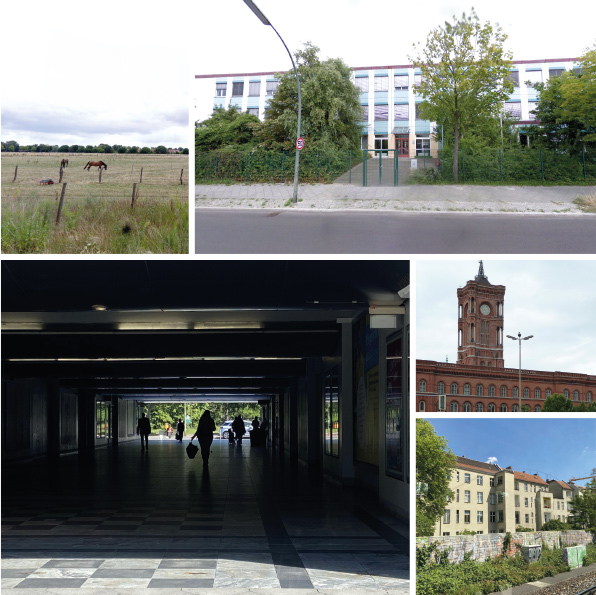 The Nelson Mandela School in Berlin-Charlottenburg is an international, bilingual high school. In summer 2019 we worked together with the students of the 9th grade on pictures. The students had already participated in the “Energy and Art” project as part of WindNODE and were familiar with the topic and well prepared. With their previous knowledge, they could very quickly start translating their ideas into photos and stories. When we gave them tips, it quickly became clear how natural the topic was for them. Several students from the photo group also joined the project, who wanted to make their contribution from an artistic-photographic point of view.
The high level of awareness of energy issues and the excessively large carbon footprint of society was also evident in the great interest and active participation of many young people in the Fridays for Future movement. The focus of her pictures is on the conscious use of nature and energy, e-mobility and digitalization. 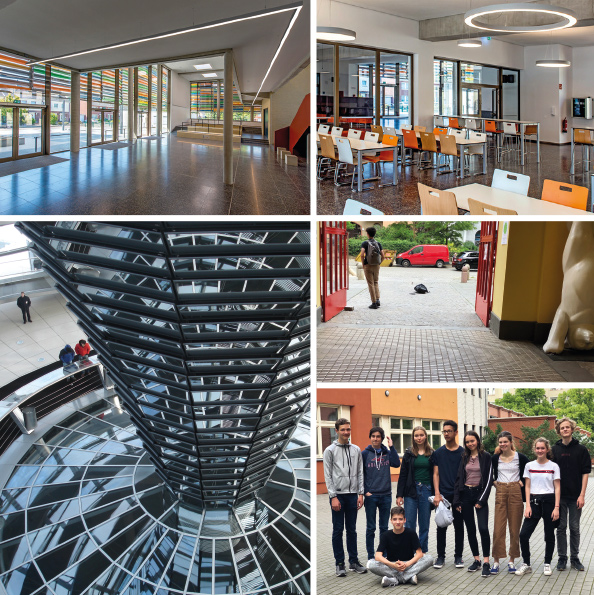